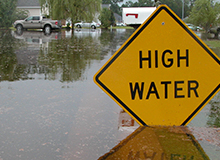 Homes are increasingly flooding, not from weather-related events but from old pipes and valves, worn-out hoses on second-story washing machines, and faulty connections from appliances that use water, The Wall Street Journal reports.

The uptick has sparked an increase in extensive water damage to homes that has been reported to insurers. One in 50 homeowners filed a water damage claim each year between 2013 and 2017, according to Verisk Analytics’ ISO insurance analytics unit. Insurers have faced a $13 billion water damage bill from insuring homes.

Claims for water damage average about $10,000, according to the report.